Despite launching my first novel last Friday night, without doubt one of the biggest highlights for me was Matthew Condon's brilliant introduction which, due to overwhelming demand, I present to you in full. Please enjoy. And send all baked desserts to the usual address...

THE OTTOMAN MOTEL
Christopher Currie
Avid Reader
Friday, May 6, 2011
YOU may well ask why a quote by me appears on the cover of the brilliant debut novel The Ottoman Motel by Christopher Currie.

Tonight I can reveal to you that it was put there to avert costly litigation. That matter has now been settled.

You see, when I first saw a bound proof of Christopher’s book and I read the first chapter I was apoplectic. For the previous three years, I had been labouring over my own new novel that I had provisionally titled The Sofa Bed Hotel. Uncanny. My lead character was not Simon, as in Christopher’s book, but actually Christopher. And as I read that fine-looking proof of his, with trembling hands, it became apparent that Mr Currie and I had been mining the same shaft, as they say in the classics.

The works were almost identical, save that his was a stylish, dark, page-turning thriller with subtle undercurrents and piercingly astute psychological insights into childhood, and mine was about a washed up and prematurely grey journalist and novelist who spent his life in the reception of a seedy flophouse full of stained Ikea fold-outs, hoping to be invited to launch talented young writers’ first books and thus re-entering the literary firmament via the back door, as they say in the classics.

I was incensed. So incensed I wrote, in a rage, an acknowledgement in my unfinished manuscript:

MY THANKS (it began)

And finally, if it’s possible to fall more out of love, in an envious literary sense, with someone every day, then that’s what I do. To the reason I had to trash my masterpiece, Christopher Currie, who, if he reads this, I hope will settle in mainland China and take his ingenious talent with him, despite the number of communists in this sentence.

Text Publishing agreed to put my name on the cover of Christopher’s book as part of our confidential court-ordered settlement. The other clause stipulated I could read the surviving fragment of my aborted master work, lost, as it is, in the glare of Mr Currie’s prodigal debut.

FYI, my three-page manuscript will be available from tomorrow as an ebook.

Christopher’s cheek stung. Krissy Kneen’s motorbike had followed him all morning, he tripped, fell, and scraped his usually idle skin. He was badly grazed beneath his “I Love Ben Law Even If He Published His First Book Before I Published My First Book” T-shirt.

He was on his way to work at Avid Reader. He passed some trees. He smelled, suddenly, the tang of new books.

He’d arrived. He went inside and took his place behind the counter. His mother’s voice floated down from upstairs. He peered through his eyelashes.

“Stand up straight and be a good boy, Christopher,” she said. (Sorry Judy, I know you’re out there.) He didn’t move. It was painful, the grazing beneath his “I Love Ben Law Even If He Published His First Book Before I Published My First Book” T-shirt.

Christopher’s mother came downstairs and stared past him, out the front window.

“Can we have the police pull Krissy Kneen over? She’s a menace,” she said.

Late afternoon now. The sun drawing lower. Christopher picked a crumb from the pocket of his shorts. A stale crumb left over from the two-metre high bombed Alaska they’d set on fire to celebrate the launch of bloody Ben Law’s first book years earlier. Christopher was hungry. He
ate the crumb anyway. It tasted good.

Wait until my launch, Christopher said. A packed Avid Reader. Plaudits. Bonhomie. Fresh crumbs, not stale. And he relished the thought of wearing a new T-shirt, the one he’d had made last week. The “Ben Law and Krissy Kneen Might Have Been Published Before Me with Their Non-Fiction Memoirs But I’ve Written a NOVEL and My Name is Christopher Currie, So Stick That up Your Bombed Alaska” T-Shirt.

A man was standing where his mother had stood. He had on dirty yellow overalls, slung up high around his armpits. It was the bloke he was getting to launch The Ottoman Motel. He was old – Christopher thought nearly grandpa’s age – but his cheeks were ridged red with ill-conquered newspaper book section editors and reviewers.

“Is this reception?” the old man asked.

The launcher laughed, rather too hard. “Where is it you need to get to, Christopher?”

“A future in letters,” the young man said.

The launcher rocked on his heels. “I can push you in the right direction, then it’s up to you,” he said. “I’m still trying to get there myself.”

“This future,” Christopher asked, “does it have ottomans? My mother keeps telling me to stand up straight all the time and my legs are tired.”

“I’m told a future in letters is ripe with ottomans.”

He followed the old launcher into Boundary Road, both of them narrowly avoiding being struck by a motorcycle ridden by someone with an uncanny resemblance to Krissy Kneen.

“Where to first?” asked the young novelist.

“What for?” a bemused Christopher said.

“We need to change your launch T-shirt. It should read -“Ben Law and Krissy Kneen Might Have Been Published Before Me with Their Non-Fiction Memoirs But I’ve Written a BRILLIANT Novel and my name is Christopher Currie, So Stick that up Your Bombed Alaska.”

Christopher smiled. Somehow, this trip was going a lot better than he’d expected it to.

*
Posted by Christopher Currie at 12:12 PM No comments:

Finally recovered from The Ottoman Motel Brisbane launch, held at Avid Reader last night! I just wanted to sincerely thank everyone who came along last night, and those who couldn't but sent well-wishes anyway. I couldn't have asked for a better launch for my first book: great venue, great hosts (the wonderful Krissy Kneen, and the hilarious Matt Condon) and plenty of books to sign! A special mention must also go to Marco Ransom-Hughes, the winner of the Avid Reader/Text Publishing Ottoman Motel Book Trailer Competition. Did I mention he is still at school? Here is his awesome trailer:

It was so nice to see Marco receiving his prize (a $100 Avid Reader voucher and Text Publishing book pack), but he also had something for me: the turtle keyring that features in his trailer (and which also features in the book). It's a really great memento of the night. Thanks, Marco!

Here are some other photos of the night. 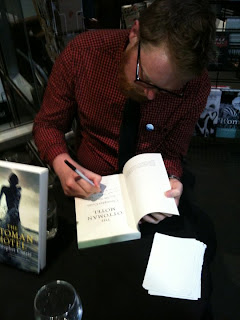 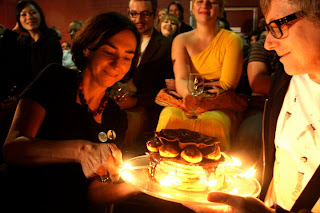 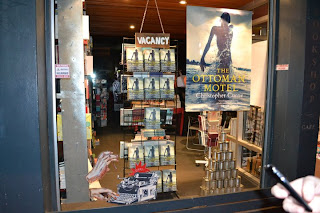 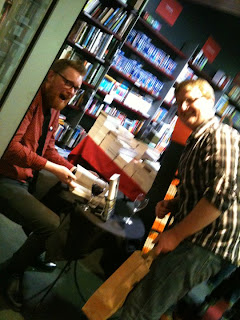 Thanks again to everyone for coming. Next stop, Melbourne on May 23!
Posted by Christopher Currie at 8:44 PM No comments:

Invites have been sent out to people I have email addresses for, but for everyone else: if you're in Melbourne on Monday May 23, why not come along?

Posted by Christopher Currie at 5:55 PM No comments:

Christopher Currie
In an effort to re-start my stagnant writing process, I posted a brand new short story each day for 365 days between March 2008 and March 2009. While the project is now finished, I will keep posting fiction, thoughts on books and the book industry, and general stuff. Please enjoy. *** Copyright 2008 | No part of the content or the blog may be reproduced without prior written permission. ***

Actual Keyword Searches That Led Someone To This Site: